Like their father, grandfather and great grandfather before them, Mike and his seven brothers were born on the West Side of Chicago. Mike worked his way through college shoveling furnaces at South Bend Foundry during the school year and driving trucks in the summer. Following graduation from the University of Notre Dame, where he was a less-than-stellar member of the hockey team, Mike spent several years trying to figure out things he should have figured out years before. He worked as a truck driver, cab driver, construction laborer, dockworker and even did a little freelance journalism for the Irish Press in Dublin.

Mike was a 24-year-old, uninspired construction laborer when a coworker asked him how much longer he was going to continue to piss away his life. That rude awakening made Mike reexamine his priorities, return to school, and pursue a career in medicine. His days as a laborer trying to get into medical school are chronicled in Blue Collar, Blue Scrubs (St. Martin’s Press). Citing a case of what he insists was divine intervention, Mike was ultimately admitted to the Loyola Stritch School of Medicine in Chicago. Upon graduation he spent five years in residency at the Mayo Clinic. His years as resident and inveterate moonlighter in rural Minnesota emergency rooms are the subject of Hot Lights, Cold Steel (St. Martin’s Press). 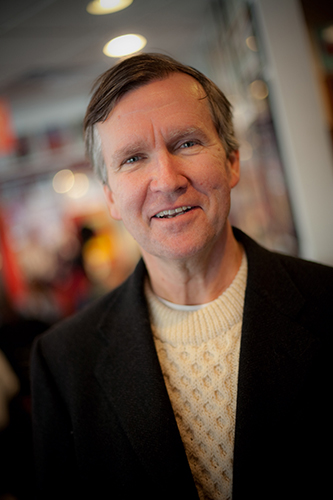 After completing his residency, where he served as Chief Resident in Orthopedic Surgery, Mike and his wife, Patti, moved back home to Chicago. They have lived in the same house for over thirty years, raising twelve wonderful kids, who may have aged them prematurely (especially three of you. Don’t give me that look, you know who you are!) but of whom they are immensely proud.

His latest work, All Bleeding Stops, represents a departure for Mike in that it is a work of fiction. In writing this book, Mike says he hopes to raise awareness of the difficulty doctors face in learning to care for and about their patients. The very qualities—compassion, sensitivity, dedication—that lead young people to a career in medicine, are often the seeds of their own destruction. Sometimes they care too much. “A generation of young men went to Vietnam naive and idealistic,” Mike says. “They returned home broken and disillusioned—if they returned at all. We doctors are often victims of a similar fate. Like soldiers, the things we see and do are often too much to bear. And, like soldiers, not all of us make it back.”